What is Ceilidh Dancing?

Come then, experience and see:

Niall and Sadie's musical paths converged while playing at a Gaelic Burns Supper at Skye's Gaelic college, after which they found themselves forming both a band and a bond!

Since this fortuitous meeting, they have been engaged in various situations in Skye - helping out with local causes, supporting a junior dance group, entertaining at Hogmanay venues in Skye and Lochalsh and providing fitting music at weddings and functions, at Armadale Castle and Fairfield Nursing Home in Inverness. They were even called upon to play at their own wedding! This obviously arose from their popularity as respected musicians, and they have displayed their particular brand of energetic music in village halls and Sabhal Mòr Ostaig's Talla Dhonaidh Chaimbeil and Talla Mhòr.

Their current efforts see them attempting to make their mark on the North West Highlands and the consideration of producing a future cd.

Sadie Gillan is of East Lothian stock who from a young age has been involved in Scottish country dancing and music. Robert, her father - an artist of some repute in his own immediate locality and further afield - encouraged his musical daughter in every way, and this attention saw Sadie take part in many major dance/music events in Edinburgh's Princes Street Gardens, as well as the Tattoo. And not only is Sadie a prizewinning accordionist, she is also a dance/tune composer and teacher/caller.

Niall Gòrdan (guitar/vocals) is a highly-accomplished Gaelic learner whose achievements include the publication of self-penned poems and songs, the translation of a soon-to-be-released book on the Skye Bridge tolls affair, and the winning of many awards at the National Mòd and in a bilingual Irish-Scottish Gaelic poetry competition in Galway. He has played in numerous bands, engaging in diverse musical forms such as heavy rock, country and western, dance music and traditional.

A Wee Bit about Music

It is said that the Scottish Highlands is a truly musical and scenic area - one would think, then, that the two things go together. And that is true, of course. Why not have a read of this leaflet and learn a thing or two about a twosome who are keeping up Highland customs such as music and songs and poetry as well. And what does "Biorachan Beag" mean? Hmmm..... 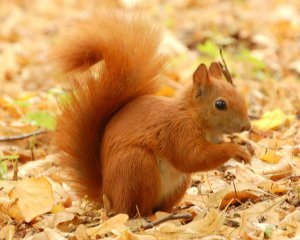 This particular name comes from a story concerning two squirrels who seek and eat nuts - with Big Squirrel eating Little Squirrel's share until he explodes! Therefore, it is a highly appropriate name for this little band - it could be said that this twosome who are involved in their music are humble and noble folk, very unlike Big Squirrel, who in the end wanted too much! The literal meaning is “Small Pointed One”, a fine desciption of a much-loved Highland resident.